The Big Short was an entertaining (and depressing) movie but, for me, it was also a chance to remember what went on in the early days of the housing bubble when my brothers and I tried to start a small company in Alabama to buy houses that were in default and then put them back on the market. At the time (2003-2005), one of my brothers had a lot of free time on his hands and all the necessary skills and licenses to do all the repair work—the fix up work—and one of my other brothers had just gotten a broker’s license and could help us with the buying and selling of homes that were in default.

At first, this seemed a good idea and a money-making proposition, but very quickly, after we got into a few deals, we all became concerned at what was happening in the banking department. Some of the deals that we were about to engage in made no sense. The more questions we asked, the more the prospects of being caught up in a fraudulent scheme being driven by bank loan officers and real estate agents sounded downright scary. Now, having seen The Big Short, it has become clear to me what, back then, was confusing.

As Robert Reich says in his recent blog entry Why Sanders’ Plan to Bust Up the Big Banks Is So Much Better than Clinton’s (The Big Short gets it essentially right.): “Traders on the Street pushed highly-risky mortgage loans, bundled them together into investments that hid the risks, got the major credit-rating agencies to give the bundles Triple-A ratings, and then sold them to unwary investors…The boom in subprime mortgages was concentrated in the private market, not in government. Wall Street itself created the risky mortgage market. It sliced and diced junk mortgages into bundles that hid how bad they were. And it invented the derivatives and CDOs that financed them.”

The market was red hot. The banks were unconcerned with the risk in the mortgages because, with their fraudulent schemes, they could hide the risks by bundling the mortgages together as commodity investments. So in the movie, the real estate agents are bragging about how they could sell these properties like hotcakes. They didn’t need qualified buyers. Anyone could buy under this scheme. They could get rich.

So it was clear to us that bank loans were being made to purchase homes by people who weren’t qualified. In fact, the banks were forgoing the down payment to buy the houses. So the people who were getting the loans not only had no down payment, but no credit rating.  It made no sense.

In the movie, some real estate agent convinced a strip tease artist that she could buy multiple homes and have multiple loans on each. The question in my mind is, “Why did these real estate agents feel they could persuade a nightclub dancer that she could?” This is certainly beyond her skill level and it sounds like she was simply a pawn in a game played by real estate brokers and the banks. Makes you wonder how many people thought they could get rich by lies and misinformation. The real estate agents in this portrayal strike me as snake oil salesmen who found victims with startling unsophistication. One more story of how greed works at all levels, but the real problem is beyond greed: it is the fraud and the lack of legal repercussions for such flagrant disregard of ethics and legal restraints.

By 2005, my brothers and I closed our company down. It felt morally wrong and probably criminally liable to be involved in this kind of enterprise. In 2005, we couldn’t see exactly what was happening. We just felt that it was wrong and we didn’t want to get caught up in a criminal scheme as unwitting participants. The Big Short lays it out.

The media is now defending the banking industry, saying that the real culprits were the fraudulent buyers that were taking advantage of easy terms and trying to flip houses. My question to this issue is, “Who is paying to have these articles written?” Could it be that once again the banks are involved in manipulating public opinion and are trying to obscure the criminal intent that is so evidently visible in the movies’ portrayal of The Big Short?

To quote Robert Reich again from the above article, “More than a century ago, Teddy Roosevelt broke up the Standard Oil Trust because it posed a danger to the U.S. economy. Today, Wall Street’s biggest banks pose an even greater danger. They’re far larger than they were before the crash of 2008… Unless they’re broken up and Glass-Steagall resurrected, we face substantial risk of another near-meltdown – once again threatening the incomes, jobs, savings, and homes of millions of Americans.”

The question is, “Will there ever be any criminal investigations into what went down during the housing bubble?” I hope so. Follow the money. It will lead back to the culprits. 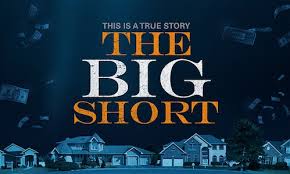 3 thoughts on “The Big Media, The Big Banks and “The Big Short””